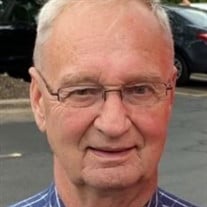 Andrew Percy Condon, age 71, died on May 28, 2021 at Vanderbilt Medical Center. He was a Vietnam Veteran and retired shop manager. Born in Eagle Lake Maine, Andy grew up being raised in Portage Lake, Maine. Upon graduating high school and enlisting in the U.S. Army, he met his wife, Mary Lou Condon, at Fort Knox, Kentucky and they married in 1970. After his time in service, they relocated back to Maine and welcomed their son in 1972. When he retired from Great Northern Paper Company in 1988, he moved his family to Murfreesboro, TN where he resided with until he passed away. Andy was a dedicated volunteer at the Alvin C. York Veteran’s Hospital in Murfreesboro, TN where he helped veterans get to their appointments on campus. He is survived by his wife of 51 years, Mary Lou Condon, their son, Jeffery (Kristi) Condon, his mother, Vivian Morris, five grandchildren, and three great-grandchildren. He is also survived by seven siblings, Alice Higgins, Grace Ouellette, Sharon Everett, Sheila Jimmo, Russell Morris, Peggy Morris, and Stuart Morris. He was proceeded in death by his father, Percy Condon and step father, Eugene Morris. A memorial service will be held Wednesday, June 2, 2021 at Jennings & Ayers Funeral Home in Murfreesboro, TN. The family will receive visitors from 10-11 a.m., followed by a memorial service at 11 a.m. Andy was a giving and loving man, and will be missed by many. The family welcomes flowers and/or donations made to Vietnam Veterans of America in his honor. Jennings and Ayers Funeral Home and Cremation Services, 820 S. Church Street, Murfreesboro, TN 37130. 615-893-2422 Please leave online condolences at www.jenningsandayers.com.

The family of Andrew Percy Condon created this Life Tributes page to make it easy to share your memories.

Send flowers to the Condon family.