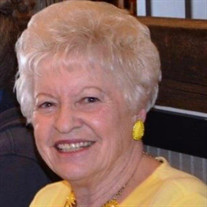 Barbara Anne (Bailey) Herrod was called home to Jesus on July 17, 2021, at 75 years young. Barbara was beautiful inside and out. She was a strong, southern, Christian woman who carried herself with grace and poise. She was a hard worker who taught her children and grandchildren to be kind, compassionate, and to love God & family above all else. Barbara is a native of Rutherford County. She was born on April 24, 1946, in Murfreesboro, Tennessee. Barbara graduated from Central High School in 1965. It would be impossible to describe Barbara’s life without including her love story with Donald Lloyd Herrod. They met in 1964 when they were 18 years old. On Valentine’s Day 1965, the handsome soldier proposed to his beautiful Barbara on a park bench on the lawn of their hometown courthouse square. They planned to wed one year later, however Uncle Sam called him to serve his country in war. Only 14 days before he deployed to Vietnam, Don and Barbara were joined in marriage on December 10, 1965. Barbara waited anxiously for Don to come home and upon his return, they began a beautiful life together. Over the next 55 years, they raised two daughters, and were blessed with six grandchildren and four great-grandchildren. They enjoyed traveling, volunteering at their church, and spending time with their close network of friends. But their favorite place was at home together, surrounded by the family they had raised. It was rare to see one without the other. So, when Don passed away on April 16, 2021, Barbara was lost without him, and she longed for him terribly. It seems that these two hearts who were intertwined for a lifetime were not meant to be apart. On a beautiful Saturday morning, only 3 months and 1 day after losing the love of her life, Barbara went to join Don in their Heavenly home where their love story will continue for eternity. Barbara was preceded in death by her parents, Buford Milton Bailey and Vergie Lee (Jernigan) Bailey; her loving husband of 55 years, Donald Lloyd Herrod; her sister, Peggy Joyce Detwiler, & her sister-in-law, Phyllis Ann Bailey. Her love remains in her two daughters, Lisa Herrod and Leslie (Keith) Whorley; her brother Johnny Lawson Bailey and brother-in-law Donald Vernon Detwiler; six grandchildren, Meagan (Brandon) Morgan, Shelby Goins, Karter (Stevie) Johansen, Kaitlyn Johansen, Stone Basham, and Kellen Johansen; four great-grandchildren, Kaebree Morgan, Jace Goins, Harper Grace Goins, & Sawyer Goins, all of Murfreesboro; many beloved nieces and nephews; and countless amazing friends. Along the journey of her life well-lived, Barbara made an impact on everyone who was blessed to know her. She was best known for her loving nature, priceless wisdom and advice, kindness, and generosity. She was selfless and always willing to help and serve others. She was beautiful, classy, and always fashionably dressed in matching accessories and her signature high heels. She was a lady of small stature, less than five feet tall, yet she was larger than life. She carried herself with grace and garnered respect from everyone because of the loving way she treated others. She loved the color yellow which is fitting because she was a ray of sunshine in this world. Barbara adored animals, she loved gardening and spending time with her friends from high school, the “65 Chicks.” She played an active role in support of her church, Fair Havens Independent Baptist and was always willing to lend a helping hand. Barbara’s favorite role was being Meme to her grandchildren and great-grandchildren, whom she adored. She was the matriarch of her family who enjoyed cooking big meals and took care of everyone without fail. Because of her strong Christian faith which she instilled in her family; we look forward to seeing her again when we join her in her mansion in Heaven. Her legacy is the family she lovingly raised, and she lives on through each of the ones she loved. Visitation will be held at Fair Havens Independent Baptist Church (1610 Riverview Drive) on Monday, 7/19 from 4pm to 7pm. On Tuesday, 7/20, visitation will be held from 11am to Noon with the funeral service at Noon with Brother Steve Goforth officiating. A graveside service will follow at Roselawn Memorial Gardens. Karter & Kellen Johansen, Stone Basham, Brandon Morgan, Garrison Benner, & Joe Lamb are honored to serve as pallbearers as we lay this lovely lady to rest. In lieu of flowers, the family requests a donation in Barbara’s name be made to the American Humane Society. Jennings and Ayers Funeral Home and Cremation Services, 820 S. Church Street, Murfreesboro, TN 37130. 615-893-2422 Please leave online condolences at www.jenningsandayers.com.

Barbara Anne (Bailey) Herrod was called home to Jesus on July 17, 2021, at 75 years young. Barbara was beautiful inside and out. She was a strong, southern, Christian woman who carried herself with grace and poise. She was a hard worker who... View Obituary & Service Information

The family of Barbara Anne Herrod created this Life Tributes page to make it easy to share your memories.

Send flowers to the Herrod family.