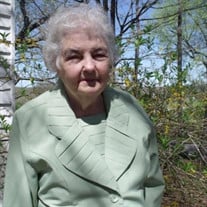 Barbara Ann Harper King, 85, passed from this life at Woodbury Health and Rehabilitation Center into the arms of her Lord and Savior on March 31, 2022. Born September 23, 1936, to Maggie Virginia Covington Bazzell and Meacham Hugh Harper, she grew up in Davidson County. She attended schools in East Nashville until leaving high school during her freshman year to marry James Robert King on September 20, 1952. They began married life with James’ family and later, rented houses in Almaville. In 1963, they bought a small farm at 1615 Rehobath Road which would become their “homeplace”. Some of the happiest times of their lives came after James retired in 1985, and they were able to be home on the farm together daily. They were devoted to God, each other and their children, and were members of the Almaville church of Christ. She cared selflessly for her husband in the years preceding his death. Ann exemplified the virtuous woman described in Proverbs 31. She put on her Lord in baptism at a young age and devoted herself to being a godly wife and mother. Whatever her husband could dream for their life together, she worked to help him accomplish. She was his right hand in everything, and learned all the skills a farm wife needed, despite her city upbringing. She could milk a cow by hand, help with hog killing and “dress” a chicken. She worked in the garden and canned and froze produce as well as making chow-chow, jams and jellies. She loved hand crafts and did beautiful embroidery, crocheted afghans, and especially loved quilting. She took great joy in sharing these loves with her daughter. She loved everything about homemaking, even declaring that she enjoyed washing dishes. Often, she could be heard singing hymns or humming as she went about her chores. She loved babies and young children and was an extraordinary mother and grandmother. She was delighted with the arrival of each new great grandchild. With her children, she played board and card games, and admonished them about good sportsmanship. She valued education, making frequent trips to the library for books to read aloud to her young children. She believed in family traditions and celebrations, all of which involved her delicious cooking. She was her children’s greatest cheerleader, supporting their educational and personal pursuits all her life. She instilled confidence by believing in them and their abilities but also taught them that talents were God-given and should be used in His service. She packed lunches for her children, even when they were commuting to college. Always, they came home to a house that smelled of delicious things simmering on the stove or baking in the oven. Her work ethic was second to none, and she never complained but frequently expressed her gratitude for such a blessed life. She read the newspaper from cover to cover, loved to work jigsaw puzzles and do word search puzzles. Ann is survived by her beloved brother, Billy Gene (Joann) Harper of Culleoka,TN; nieces and nephews. She is also survived by her children: James Robert Jr. (Lori) King of Temple Terrace, FL; Anita Carol King Birt (Norman) of Longmont, CO and Stephen Dale (Angie) King of Murfreesboro. She was grandmother of James Matthew (Meghan) King, Jonathan Eldridge (Katie) King, and Sarah Elizabeth King (Michael) Grant; Nathan (Julie) Birt, Chad (Heather) Birt, Adam (Jena) Birt, Anne Birt (Patrick) Schaunaman; Daniel (fiance’ McKenzie Sissom) and Kara King. In addition, she cherished 7 great-grandchildren: Micah, Titus, Ezra and Phoebe Birt; Jackson Schaunaman; Brightly Birt; and Harper Rose King, born two days before her passing. Per her request, there will be a private graveside service for immediate family. Burial will be in the cemetery on the King Farm. Jennings and Ayers Funeral Home, 820 S. Church Street, Murfreesboro, TN 37130. 615-893-2422 Please leave online condolences at www.jenningsandayers.com.

Barbara Ann Harper King, 85, passed from this life at Woodbury Health and Rehabilitation Center into the arms of her Lord and Savior on March 31, 2022. Born September 23, 1936, to Maggie Virginia Covington Bazzell and Meacham Hugh Harper, she... View Obituary & Service Information

The family of Barbara Ann King created this Life Tributes page to make it easy to share your memories.

Barbara Ann Harper King, 85, passed from this life at Woodbury...

Send flowers to the King family.