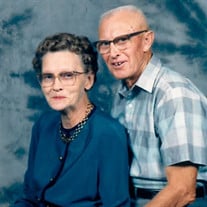 Cantrell Compton, age 97, passed away November 11, 2019 at his residence. He was a lifelong resident of Rutherford County. Cantrell served in the United States Army during World War II where he received a Victory Ribbon, Good Conduct Medal,... View Obituary & Service Information

The family of Cantrell Compton created this Life Tributes page to make it easy to share your memories.

Send flowers to the Compton family.