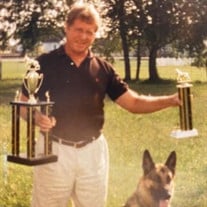 On Monday, May 16, 2022, Eddy Barrett passed away at the age of 79. Eddy was born May 31, 1942, in Murfreesboro, Tn to Ed and Marie Barrett. He graduated from Central High School in 1960. He was a self-employed business owner for many years in Murfreesboro. Eddy never married but helped to raise several nieces and nephews. He was a faithful and loving son and was a tremendous caregiver serving both his parents and his sister for many years. Eddy had a passion for German Shepherd Dogs and Jack Russell terriers. He trained several German Shepherd dogs that served in police work, and also won regional and national competitions with his working terriers. Eddy was a faithful member of the church of Christ, growing up in the Westvue congregation. His faith grew over the years and he was known to occasionally give a talk at worship service, though he was more comfortable serving in the background. He was known for his good sense of humor and diverse abilities and skill to mechanically fix many things. He had a passion for cars and in his younger years he and his brother would compete in organized drag racing events with vintage Corvettes. He loved to hunt and fish and his nephews and grandnephews have many fond memories of fishing and hunting trips with Uncle Eddy. Like many Barretts he had a keen interest in firearms. He served in the National Guard and qualified as an expert marksman. He taught many of his nephews how to safely and expertly handle a gun. Eddy was preceded in death by his father, Ed, and his mother Marie. He is survived by his brother Owen (Linda), his sister Sharon, his niece Monica and nephews Matthew and Barton, and seven grandnephews and one grandniece. A graveside service will be held Saturday May 21st at 3pm at the Evergreen cemetery. Jennings and Ayers Funeral Home, 820 S. Church Street, Murfreesboro, TN 37130. 615-893-2422 Please leave online condolences at www.jenningsandayers.com.

On Monday, May 16, 2022, Eddy Barrett passed away at the age of 79. Eddy was born May 31, 1942, in Murfreesboro, Tn to Ed and Marie Barrett. He graduated from Central High School in 1960. He was a self-employed business owner for many years... View Obituary & Service Information

The family of Charles E. Barrett created this Life Tributes page to make it easy to share your memories.

Send flowers to the Barrett family.