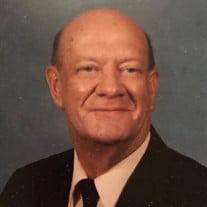 Charlie Kenneth “Ken” Foster, age 80, went home to be with his Lord on Saturday, September 14, 2019. Ken was born on May 31, 1939 in Murfreesboro, Tennessee to the late Charlie B. Foster and Louise Henard Foster. Ken was a graduate of Central High School, class of 1958. He served in the United States Army from 1958 to 1962. He married his life-long sweetheart, Alice Faye Bullard on August 1, 1959. Ken retired from Dixie Graphics, Inc., in Nashville, after 42 years. While working in Nashville, he worked with the homeless; holding morning devotions in his work parking lot. In 1984, he was awarded the Broadway Merchants Special Citizen Award and was dubbed the “Parking Lot Preacher”. Ken was ordained as a minister in 1980 and served in a number of churches, in different roles. Ken was a member of the Fair Haven Independent Baptist Church where he often preached, taught Sunday school, and served as a Deacon. Ken was preceded in death by his parents; sister, Barbara Scott; and brother-in-law, Walter Watt. He is survived by his wife of 60 years, Alice Foster; daughter, Cynthia Adams; grand-daughter, McKenzie Adams; brother, Larry (Sandy) Foster; sister-in-law, Nelda Watt; numerous nieces and nephews and a host of other family and friends. Visitation with the family will be 3:00pm – 8:00pm on Tuesday, September 17, 2019 at Fair Haven Independent Baptist Church, in Murfreesboro. The funeral service will be Wednesday, September 18, 2019 at 11:00am at the church. Bro. Steve Goforth and Bro. Danny Mayo will officiate. Bro. Darryl Johnson and Bro. Rick Jones will also take special part in the service. . Burial will follow in Evergreen Cemetery with family serving as pallbearers. The family would like to thank Dr. Stephen Odom and staff; Dr. Victor Gian, Ms. Kathy Grant and all the dedicated staff at Tennessee Oncology. Arrangements are under the direction of Jennings and Ayers Funeral Home and Cremation Services, 820 South Church St., Murfreesboro, TN 37130. 615-893-2422. Please leave online condolences at www.jenningsandayers.com.

The family of Charlie Kenneth Foster created this Life Tributes page to make it easy to share your memories.

Send flowers to the Foster family.