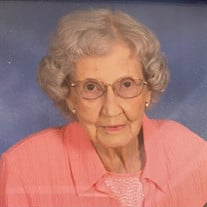 Connie Yeargan McGehee, age 98, passed away at her residence May 9, 2021. She was a lifelong resident of Rutherford County. She was born on March 5, 1923 to her wonderful parents, Oliver and Eudie Snell Yeargan who preceded her in death. She was a loving daughter, sister, cousin, wife, mother and aunt. She was the baby sister to four loving brothers who are all deceased, Rev. Hilary, Edmund, Raymond Yeargan of Murfreesboro and Oliver, Jr. of Jackson. Connie was a typical tomboy, never a pony or horse she could not ride, living on a farm near Barfield. During World War II, she worked at Oak Ridge where the atomic bomb was developed. She worked at Air Utility covering small training planes. After the war she worked at St Thomas Hospital. Connie and Everett McGehee married in 1947. They lived in Nashville for 23 years and moved to Murfreesboro to build a home on the farm where Connie grew up. Everett died in 2016. She was a member of Farris Chapel United Methodist Church and the F.C.E. Club of Blackman. She was an accomplished painter. Connie spent much of her life as a caregiver for family and friends and enjoyed visiting nursing homes. Connie is survived by her sons, Lannie (Jeanne) McGehee and Leslie McGehee; grandchildren, Jody (Stacey) McGehee, Ryan (Charlena) McGehee and Connie Abigail McGehee. She is also survived by her great-grandchildren, Roxanna McGehee, Carolynna Connie McGehee and Everett Joslin. She lost an infant son, Douglas Craig in 1956. Visitation will be 1:00 PM until time of 2:00 PM service, Thursday, May 13, 2021 at Farris Chapel United Church with Dr. Debbie Church and Pastor Ann Meece. Burial will follow in Yeargan Family Cemetery with family and friends serving as pallbearers. Jennings and Ayers Funeral Home and Cremation, 820 S. Church Street, Murfreesboro, TN 37130. 615-893-2422 Please leave online condolences at www.jenningsandayers.com.

Connie Yeargan McGehee, age 98, passed away at her residence May 9, 2021. She was a lifelong resident of Rutherford County. She was born on March 5, 1923 to her wonderful parents, Oliver and Eudie Snell Yeargan who preceded her in death. She... View Obituary & Service Information

The family of Connie Yeargan McGehee created this Life Tributes page to make it easy to share your memories.

Connie Yeargan McGehee, age 98, passed away at her residence...

Send flowers to the McGehee family.