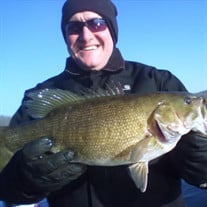 Craig Edward Mullen, age 55, took his final breath on earth and his first breath in his heavenly, eternal home on Wednesday, April 22nd, 2020, after a courageous battle with cancer. He had a peaceful passing in the comfort of his home with his wife, Paula, and all of his children. Craig was born in Osceola, Iowa, on December 23rd, 1964, to Melvin Mullen and Ann Wenzig. He was grateful to be raised by such loving parents, including his step-parents, Richard Wenzig and Jane Mullen. He is survived by his wife, Paula Jean Mullen; sons, Clinton Mullen (Lyndsey), Gabe Mullen, Michael Mullen and Luke Mullen; daughter, Jenna Burris (Weston) all of Murfreesboro, TN; parents, Melvin and Jane Mullen of Hopeville, Iowa and Richard and Ann Wenzig of Creston, Iowa; Father and Mother-in-Law, Bob and Rhonda Vogel of Creston, Iowa; sister, Teresa King (Joe Beck); sister-in-law, Brenda Wood-Clark (Jay); nephews, AJ Miler and Bryant Wood; niece, Ann Marie Miler and many cousins and dear friends. Nehemiah 8:10, "The joy of the Lord is your strength", describes Craig well. Even as a child he was known to light up a room with his smile and joyful countenance. This joy grew into his adult life and touched all who knew him and strangers alike. As a boy he enjoyed all things outdoors. He cherished camping and boating; hunting, target shooting and fishing; tractor pulls and professional four-wheel racing with his parents and friends. As an adult he shared his love of the outdoors with his own family that created precious memories. Craig was a 1983 graduate of Creston High School, where he played football and tennis. He developed life-long friendships with many of his classmates and appreciated each one. He later graduated from Lincoln Technical Institute in 1984, with the hopes of owning his own construction company. Craig worked for Wenzig Construction in Creston, Iowa, several years expanding his operating and business skills. After moving to Tennessee in 1988, he worked as a construction foreman for Holligan Homes until 1992. On May 15th, 1992, Craig's goal of owning his own company came to fruition. He began Mullen Construction, a landgrading company for new homes. He gained many valuable friendships through his business, for which he was thankful. He was blessed and enjoyed working part-time until his passing. Craig's company thrived for over 28 years and will continue. Craig was married to Paula Jean Vogel, on February 23, 1991, at The First Christian Church, in Creston, Iowa. They were happily married for 29 years and created a beautiful life and family together. Their children, Clinton Mullen (Lyndsey), Jenna Burris (Weston), Gabe, Michael and Luke Mullen were his treasure. He did very little without atleast one of them by his side and nothing made him more proud. His last memory of them was etched in his mind the night before his passing. All seven of them stood around him, laid hands on him and prayed. One last, priceless gift from those who meant the most to him. Craig accepted Jesus as his Lord and Savior, October 15, 1991, and was baptized. His life was never the same. He was an active member of The United Methodist Church for 29 years, volunteering at every turn. His favorite place to serve was as Youth Leader. He adored the middle schoolers and cherished the time serving long side his wife and children. He was sincerely grateful for his church family. Craig chose a life mantra for himself and his family, "Conquer and Overcome in Jesus' name", inspired by: 1 John 5:4, "For everyone born of God is victorious and overcomes the world; and this is the victory that has conquered and overcome the world - our faith." It was with this mantra he led his family. This mantra was never more pertinent than the last four years of his life. Craig's wisdom in knowing and surrendering his life to Jesus made his battle with cancer inspirational to all who watched. He fought relying on his relationship with The Lord and on God's Word. He continued walking in joy with a smile, sharing prayers and God's love with everyone around him... Not only with those he knew but strangers as well. His steadfast faith was phenomenal. Many were brought to saving grace because of his passion for Jesus and his amazing, genuine love for people. Craig Mullen was a respectable, good, Christian man; a faithful, remarkable husband and father; admired and loved by many. He will truly be missed. In consideration for the health and safety of family and friends, a private burial will be conducted at Cothran Cemetery, in Rockvale, TN, with ministers Don Morris, Mack Strange, Albert Willis, Trey Carey & Rick Sears officiating. Jennings and Ayers Funeral Home and Cremation Services, 820 South Church Street, Murfreesboro, TN 37130, 615-893-2422 is in charge of burial arrangements.

Craig Edward Mullen, age 55, took his final breath on earth and his first breath in his heavenly, eternal home on Wednesday, April 22nd, 2020, after a courageous battle with cancer. He had a peaceful passing in the comfort of his home with... View Obituary & Service Information

The family of Craig Edward Mullen created this Life Tributes page to make it easy to share your memories.

Send flowers to the Mullen family.