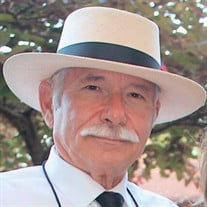 Donald Lloyd Herrod, of Murfreesboro, passed away peacefully on April 16, 2021 at home. Don was strong and kind and he persevered with strength and grace throughout his life. He had a strong work ethic and he taught his children and grandchildren that they must never give up, no matter the challenge, until their work was finished. Fittingly, one beautiful spring Friday, at the age of 75, Don’s work on earth was finished and the Lord called him home to rest eternally. Don is a lifelong resident of Rutherford County. He married the love of his life, Barbara, shortly before leaving for Vietnam in 1965. Throughout their 55 years of marriage, they traveled together and made countless memories, but their favorite pastime was spending time at home with the family they had raised. Don was preceded in death by his parents, James Lloyd Herrod and Cornelia Hopkins Herrod of Lascassas. He is survived by his loving wife, Barbara Bailey Herrod of Murfreesboro. His love remains in his children Lisa Herrod and Leslie (Keith) Whorley; brothers, David (Pat) Herrod of Gadsden, Alabama, Mack Herrod, Jeff Herrod; sisters Ann Herrod, Connie Davis, Penny (Allen) Vick; Brother-in-laws Johnny Bailey and Donald Detwiler; six grandchildren, Meagan (Brandon) Morgan, Shelby Goins, Karter (Stevie) Johansen, Kaitlyn Johansen, Stone Basham and Kellen Johansen; four great-grandchildren, Kaebree Morgan, Jace Goins, Harper Grace Goins, and Sawyer Goins, all of Murfreesboro; many beloved nieces & nephews; As well as his lifelong friend, Joe Smythe, of Lascassas. Don graduated from Lascassas High School in 1964. He then joined the US Army in the 101st Airborne Division attached to the 5th Special Forces Group in Vietnam where he was awarded the Bronze Star for Valor for his heroic actions in the United States Army. After his honorable discharge from service, he returned home to Middle Tennessee where he completed his apprenticeship in Tool & Die Making. A few years later, he furthered his education and became a Programming Engineer in the airframe industry until he retired. Along the road of his life well-lived, Don made countless friendships. He was truly loved and respected by all who knew him. He was best known for his sense of humor, quick wit, and his generosity. He was patriotic and never failed to anonymously pay for the meal of a veteran at a restaurant. Don loved animals, and he enjoyed walking his dogs & golfing with his friends and grandsons. He was a deacon at Fair Havens Independent Baptist Church and readily helped anyone who needed it. Don’s favorite role was being Papa Don to his grandchildren and great-grandchildren, whom he adored. He was larger than life, was the patriarch of his family, & he took care of everyone without fail. Because of his strong faith which he instilled in his family; we look forward to seeing him again when our work in this life is finished. Visitation will be held at Fair Havens Independent Baptist Church (1610 Riverview Drive) on Wednesday 4/21 from 11am to 1pm. Followed by the funeral service at 1pm with Brother Steve Goforth officiating. A graveside service will follow at Roselawn Memorial Gardens. Karter & Kellen Johansen, Stone Basham, Brandon Morgan, Garrison Benner, & Greg Bailey are honored to serve as pallbearers as we lay this great man to rest. In lieu of flowers, the family requests a donation in Don’s name to his favorite organizations of either Wounded Warriors or the American Humane Society. Jennings and Ayers Funeral Home and Cremation, 820 S. Church Street, Murfreesboro, TN 37130. 615-893-2422 Please leave online condolences at www.jenningsandayers.com

Donald Lloyd Herrod, of Murfreesboro, passed away peacefully on April 16, 2021 at home. Don was strong and kind and he persevered with strength and grace throughout his life. He had a strong work ethic and he taught his children and grandchildren... View Obituary & Service Information

The family of Donald Lloyd Herrod created this Life Tributes page to make it easy to share your memories.

Send flowers to the Herrod family.