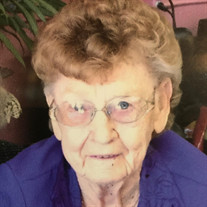 Dorothy Ann “Dot” Neely Richardson, age 79, passed away September 23, 2019 at her home. She was born October 29, 1939 and she lived in the Murfreesboro area her entire life. She was a homemaker and worked several years in food service at Walter Hill Elementary, Bellwood Elementary and Stones River Manor. Dot is survived by her husband James Richardson, daughter Joan Richardson of Murfreesboro, sons Steve (Terri) Richardson of Murfreesboro, Ralph (Mary) Richardson of Woodbury and Tommy D Richardson of Murfreesboro. She is survived by her 7 precious grandchildren, Erin (Paul Pearson) Richardson of Murfreesboro, Brandon (Megan) Richardson of Readyville, Michael Andrew Patton of Murfreesboro, KristyAnn (Zach) Grimes of Woodbury, Colton D Richardson of Cookeville, Chase Richardson of Murfreesboro, and Neely Richardson of Murfreesboro. She is also survived by 5 great-grandchildren that she absolutely adored. Dot was proceeded in death by her parents, William D and Eula Mai Neely, sisters Bobbye Jean Barrett and Connie Mai Neely and a granddaughter, Candace Richardson. Dot was a devout Christian and loved the Lord. She was a member of the Walter Hill Church of Christ where she attended faithfully until her health prevented her from doing so. Through her life, Dot was known by many names, she was Grandmama or Mema to her grandchildren. She was known as Aunt Dot to many who may or may not have been related through her years of babysitting and making lifelong bonds with those she cared for. She was known as Mama or Ma to her children and Honey, Mommy or Dot to her loving husband. Dot and James were married January 9, 1960 and together they built a life that lasted almost 60 years. Dot loved to travel when she could, one of her most memorable trips was getting to see the Grand Canyon. But of all the places she was able to travel to, she enjoyed going to the Great Smokey Mountains the most. This was the destination for many family vacations when her children were young and after James retired they spent many weekends in the mountains together. Visitation with the family will be 3:00-8:00 PM, Thursday, September 26, 2019 at Jennings and Ayers Funeral Home and from 9:30-10:30 AM, Friday, September 27, 2019 at Walter Hill Church of Christ. Funeral service will be at 11:00 AM, Friday, September 27, 2019 at Walter Hill Church of Christ with Ralph Richardson and Paul Norwood officiating. Burial will follow at Roselawn Memorial Gardens. Pallbearers will be Brandon Richardson, Michael Andrew Patton, Colton Richardson, Chase Richardson, Zach Grimes, Paul Pearson, and Paul Richardson. The family would like to offer a special thanks to Janet Alexander who lovingly helped take care of “Mrs. Dot” over the last several years. The family would also like to thank Dr. Donald Patterson and his staff for their loving care. Dr. Thomas Davis of the Vanderbilt Neurology Department for his care for the many years that she suffered from Parkinson’s disease and the staff at Amedisyst Home Health Services for their help and care in being able to keep her at home where she wanted to be. In lieu of flowers, donations can be made to St. Jude’s Hospital, Walter Hill Church of Christ Building Fund or the charity of your choice. Walter Hill Church of Christ is located at 7277 Lebanon Rd, Murfreesboro, TN 37129. Arrangements are under the direction of Jennings and Ayers Funeral Home and Cremation Services, 820 South Church St., Murfreesboro, TN 37130. 615-893-2422. Please leave online condolences at www.jenningsandayers.com.

Dorothy Ann &#8220;Dot&#8221; Neely Richardson, age 79, passed away September 23, 2019 at her home. She was born October 29, 1939 and she lived in the Murfreesboro area her entire life. She was a homemaker and worked several years in food service... View Obituary & Service Information

The family of Dorothy Ann Richardson created this Life Tributes page to make it easy to share your memories.

Send flowers to the Richardson family.