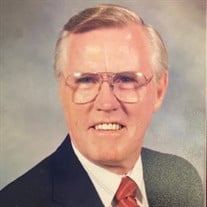 Murfreesboro resident, Earl Edward Yake, 89, passed away peacefully in his sleep on Saturday March 21, 2020 due to Parkinson’s Disease. He was born on June 5, 1930 to the late Frank and Pearl Yake of Lexington, Michigan. He was a member of the Rockvale Cumberland Presbyterian Church and was retired from the Air Force and GE. He graduated from Lexington High School in the year of 1948 and joined the Air Force in December of 1950. He was in communications, on the flight crew, and had over a thousand flying hours under his belt. His accomplishments also include working on the Apollo flights - communicating back to Washington, serviced in Air Rescue in Greenland, went to Vietnam and was stationed at air bases all around the United States. His last post was at the Pentagon/DCA. After his retirement from the Air Force, he went to work for General Electric and retired from there in 1992. He enjoyed traveling and spending his winters in Florida. His passion was working with wood and his grandchildren - he could often be seen in the yard pulling them in a wagon behind his lawn mower. He is preceded in death by his daughter, Deborah Marie Yake Tilley; his sister, Lillian Snaden; two brothers, Frank and Wayne Yake; and in-laws, Charles Fye, William Snaden and Carolyn Yake. He is survived by his wife, Linda Yake; his daughter, Kathleen (Brian) Campbell of Golden, Colorado; sons, Keith (Angela) Bolinger, Kevin (Stephanie) Bolinger of Murfreesboro, Tennessee, and Eddie (Janice) Yake of Spring Field, Virginia; his sisters, Joyce (Dwaine) Manska of Ft. Gratiot, Michigan, Jaqueline Fye, Edwina (Kenneth) Carson of Lexington, Michigan; and son-in-law, Bob Tilley of Alpharetta, Georgia; his grandchildren, Robert (Lori) Tilley of Apopka, Florida, Stephanie (Jack) Bisase of Jacksonville, Florida, Austin Campbell of Firestone, Colorado, Lindsey (Tripp) Ross of Woodbridge, Virginia, Melissa (John) McDowell of Granbury, Texas, Paige, Miranda, Jena, and Noah Bolinger of Murfreesboro, Tennessee; his great-grandchildren, Faith Tilley, Lara, Lincoln, and Levi Bisase, and Easton Ross, Dylan and Isabella Neathery , Sydney McDowell; in-laws, nieces and nephews, and friends in Michigan and Southern Charm RV Park in Florida. A special thanks to nephew, Mark Fye and Cares Healthcare for all they have done over the past couple of years. His legacy will live on in the hearts and minds of all he interacted with as well as those he reached but never met. Memorials can be made to the Rockvale Cumberland Presbyterian Church (P.O Box 67, Rockvale, TN 37153) or to the Parkinson’s Foundation. Jennings and Ayers Funeral Home and Cremation Services, 820 South Church St., Murfreesboro, TN 37130. 615-893-2422 is in charge of arrangements. In consideration for the health and safety of family and friends, a celebration of life will be held at a later date.

Murfreesboro resident, Earl Edward Yake, 89, passed away peacefully in his sleep on Saturday March 21, 2020 due to Parkinson&#8217;s Disease. He was born on June 5, 1930 to the late Frank and Pearl Yake of Lexington, Michigan. He was a member... View Obituary & Service Information

The family of Earl Edward Yake created this Life Tributes page to make it easy to share your memories.

Send flowers to the Yake family.