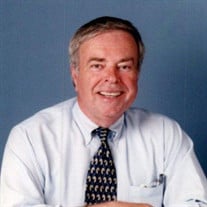 Gerald Emory Noffsinger, age 85, passed away on Wednesday, June 10, 2021. He is preceded in death by his wife Helen Wolfe Noffsinger, daughter Nanette (Brooks) Noffsinger, parents Gilbert and Mattie Sue Noffsinger and sister Janene N. Davis. Gerald is survived by children Noland Noffsinger (Jeanette); and Natalie Beckman (Chris); and grandchildren Mackenzie Reeves (Kurt); Kaitlyn Mitchell (Paxton); Garrett Noffsinger (Anna Kate) and Spencer and Madison Beckman. Gerald was born in Bremen, Kentucky on October 20th of 1935, the youngest of two children. While still young, his family moved to Nashville, TN where he attended high school at Hume Fogg. While at Hume Fogg, he excelled at sports, was class president and voted most popular male. He studied at Martin Methodist College where he played basketball, baseball and tennis. While there, he also met a girl from Savannah, Tennessee named Helen that would become his wife. Once married, they lived in Nashville where Gerald worked for Procter & Gamble. During this time, Gerald was called to the ministry and the family moved to Georgia so he could attend seminary at Emory University. Gerald began his preaching while in Georgia in Barnesville. Upon returning to Tennessee, he worked in Clarksville as the Austin Peay campus minister and Nashville as the Tennessee Conference Minister for Youth and Young Adults. He became a Deacon in 1965 and an Elder in 1967 which gave him the opportunity to serve congregations throughout Middle Tennessee. During his ministry, he served Tennessee churches in Adams, Clarksville, Lebanon, Goodlettsville, Portland, Nashville, Murfreesboro and Smyrna. In many of these churches, Gerald and Helen also started Sunday School classes and saw great growth in membership. In 1988, Gerald started the Breakfast Rotary in Murfreesboro and was the first President. He was a rotary member in Portland, Lebanon and Smyrna. Gerald was also a graduate of both Leadership Rutherford and Wilson. After retiring, he decided a great way to continue to meet new people was real estate. He enjoyed time at both Parks and Exit Realty. Throughout his life, Gerald always loved sports. Whether a local or college team, you could find him on the sidelines for football, basketball, volleyball and baseball. He was “True Blue” and loved MTSU. He also enjoyed photography and capturing the moment on film to share with the person. More than anything, he loved people. He loved making a connection and helping people through hard times. He wanted to help others without recognition. A smile, a joke, buying a lunch…whatever he could do to brighten someone’s day. His greatest joy was through his children and grandchildren and watching them develop into successful, caring and compassionate people. The visitation and service will be held at St. Mark’s United Methodist Church, Murfreesboro, Tennessee on Sunday, June 13, 2021. The visitation will take place before and after the service beginning at 1:00. The celebration of Gerald’s life will be held at 3:00. Burial will be at Roselawn Cemetery on Monday, June 14, 2021 at 2:00. Memorials for Gerald may be made to a memorial fund at St. Mark’s United Methodist Church, 1267 N. Rutherford Blvd., Murfreesboro,TN 37130 Jennings and Ayers Funeral Home and Cremation Services, 820 S. Church Street, Murfreesboro, TN 37130. 615-893-2422 Please leave online condolences at www.jenningsandayers.com.

The family of Gerald Emory Noffsinger created this Life Tributes page to make it easy to share your memories.

Send flowers to the Noffsinger family.