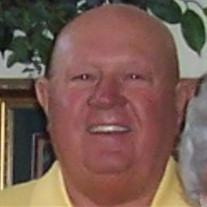 Harvey Higdon passed away January 6, 2022 at Alive Hospice in Murfreesboro. He was a lifelong resident of Rutherford County and worked in plumbing and construction for over 40 years. He was known for his trade in Rutherford County. Harvey was... View Obituary & Service Information

The family of Harvey Higdon created this Life Tributes page to make it easy to share your memories.

Harvey Higdon passed away January 6, 2022 at Alive Hospice in...

Send flowers to the Higdon family.