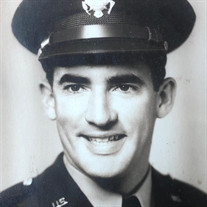 James H. McBroom, Jr., age 99, born August 9, 1919, of Murfreesboro, TN passed away peacefully on Thursday July 18, 2019 near family in Atlanta, GA. James was preceded in death by his loving wife Marian Ruth DeMonbreun McBroom; parents, James and Johnnye Pearl McBroom; and by his loyal daughter Marian Olivia McBroom Hoens, also of Murfreesboro. James served in the Army during WWII and entered Europe through Normandy. He studied at Auburn University and Vanderbilt University and held his professorship at Middle Tennessee State University where he spent the majority of his career. James was a “gentleman farmer” and enjoyed the last 55+ years of his life in the beautiful and bucolic area of Big Springs, Christiana. TN Along with his wife, Marian DeMonbreun McBroom, James was a founding member of the Timothe’ deMontbrun Heritage Society in Nashville. He played a crucial role in the erection of the monument to Timothe’ deMontbrun at Fort Nashborough, along the banks of the Cumberland River. He is survived by his son, James H. McBroom III of Atlanta, GA and grandchildren Montell deMontbrun McBroom Marra, James Houston McBroom IV, Molly Meredith McBroom Hudgens, Heather Sprott McBroom Vasquez and a much loved step grandson, Joseph C. Hoens. He is also survived by 10 great grandchildren, including a James H. McBroom V, his namesake and son-in-law, Robert J. Hoens. James, “Mac” or “Boom Boom,” as he was called by all of his grandchildren, was a calm soul with a gentle wit and unmatched integrity and humility. He was highly thought of for his wisdom, good judgement and ability to feel and teach compassion for humanity. His subject of teaching was Sociology and his leadership and civic-mindedness carried over into his personal life as well. He will be lovingly remembered as a classic example as one of “the greatest generation.” Visitation with the family will be 9:00 until time of funeral service, at 10:30 AM. Saturday, July 27th at Jennings & Ayers Funeral Home 820 S. Church Street, Murfreesboro, TN. Dr. Lenny Farmer will officiate. Immediately following the service, the burial, with military honors, will be held at Woodlawn Memorial Park, 660 Thompson Lane, Nashville, TN. In lieu of flowers, memorial contributions may be made to The Timothe’ DeMonbreun Heritage Society, 3706 Vista Lane, Knoxville, TN 37921 Arrangements are under the direction of Jennings and Ayers Funeral Home and Cremation Services, 820 South Church St., Murfreesboro, TN 37130. 615-893-2422. Please leave online condolences at www.jenningsandayers.com

The family of James H. McBroom Jr created this Life Tributes page to make it easy to share your memories.

Send flowers to the McBroom family.