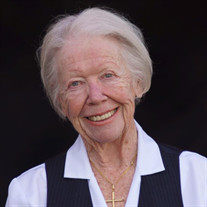 Jo Wintker was born Joan Jeter on June 7, 1933 in Jackson, TN. She grew up on a hard-working farm, picking strawberries and chopping cotton from the time she was old enough to walk. With a lifelong interest in the arts, she studied acting and theater arts at Memphis State University. After graduation, she pursued an acting career first in New York and later Los Angeles. She considered acting a God-given talent, a gift that she was meant to share with the world. She was happiest when she knew she had made someone laugh. By the mid-sixties, however, she had a growing feeling of wanting to do some sort of work with children. She followed that feeling back home to Tennessee, where she achieved a master’s degree in counseling and began what would become a decades-long career in social work. While serving as executive director of Outlook Nashville, she met Ray Wintker, Junior of Memphis, TN. Then a “long-haired hippy” and Vietnam veteran working to become a psychologist, their shared passion for service-oriented work, along with their natural chemistry, overcame their age difference and resulted in two daughters and a joyous 29-year marriage. Retired at 63 and widowed a year later, Jo found her way back to her original love, acting. She performed in several plays in Murfreesboro, TN and eventually landed a few small roles in movies. By that time, she was living with her eldest daughter and son-in-law in Nashville, where she joined St. Phillip’s Episcopal Church in Donelson and became active in Children’s Church. Jo loved teaching and nurturing children, particularly the ones she called “pistols”— independent, willful children who questioned authority and weren’t afraid to go their own way. In her final year of life, as the pandemic curtailed her activities and kept her from most of the people she loved, Jo maintained her positivity by working in her yard, tending her pansies, painting when the spirit moved her, and watching her “grand-cat” go for walks with her daughter. At the time of her death, both of her daughters, the son-in-law she loved like her own, and a total of three “grand-cats” were sharing her home with her, filling her life and her heart with as much silliness and love as they could. Jo is survived by her daughters, Sally and Abby; her son-in-law, Terry; her brother, Bruce; her cousin, Gloria; several beautiful, dedicated friends; and countless surrogate grandchildren from her decades of volunteer work at St. Paul’s Episcopal Church in Murfreesboro and St. Phillip’s in Nashville. Jennings and Ayers Funeral Home and Cremation, 820 S. Church Street, Murfreesboro, TN 37130. 615-893-2422 Please leave online condolences at www.jenningsandayers.com

Jo Wintker was born Joan Jeter on June 7, 1933 in Jackson, TN. She grew up on a hard-working farm, picking strawberries and chopping cotton from the time she was old enough to walk. With a lifelong interest in the arts, she studied acting and... View Obituary & Service Information

The family of Jo Helton Wintker created this Life Tributes page to make it easy to share your memories.

Send flowers to the Wintker family.