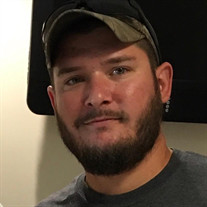 On Tuesday, November 2nd, 2021, Joshua J. “Josh” Toney- a loving husband, father, uncle, son unexpectedly passed away at the age of 30. Josh was born on December 20, 1990, to Mike and Lisa Toney in Dickson, TN. Josh graduated from Eagleville Highschool. He hooked the love of his life, Ashley in 2010 and they married in 2017. One year later they welcomed their daughter, Sophia “Soso”, who instantly stole her Daddy's heart. From tea parties to nail painting, whatever Soso wanted, Daddy delivered. Josh had a love for the outdoors. Most of his childhood was spent camping and fishing with family and friends. He was a lifelong Alabama football fan, and in his younger years had a passion for playing baseball. Josh loved throwing the ball around the backyard with his "little buddy" Kyler and was adored by all his nieces and nephews who knew him best as "Uncle J". Josh is survived by his wife Ashley, his daughter Sophia, his parents Mike and Lisa Toney of Rockvale, TN, his sister Staci Sewell and brother-in-law Kyle Sewell; nieces Hailey Grace, Hailey Marie, Lillie James; Nephews Kenneth and Kyler, all of Eagleville, TN, his aunt Peggy Duszynski, or "Homer" as they loved to call each other, of Atlanta, GA, his aunt Linda Beatty and Uncle Jerry Beatty of Mt. Juliet, TN, his aunt Dawna Luther of Dickson, TN, cousin Christin Christman and husband Ryan and their 4 children of Lebanon, TN, mother-in-law Peggy Watkins and husband Larry Hill of Murfreesboro, TN, brother-in-law Lonnie Watkins and wife Shanta of Athens, TN, brother-in-law Dustin Watkins and wife Kristen of Murfreesboro, TN. Josh was preceded in death by his cousin, Jeremy Beatty of Mt Juliet. Visitation with the family will be 4:00-7:00 PM Friday November 5, 2021, at Jennings and Ayers Funeral Home. Chapel service will be 11:00 AM Saturday, November 6, 2021, at Jennings and Ayers Funeral Home. The family is asking for thoughts and prayers as they grieve. The family has started a gofundme page to help support the family with expenses at https://www.gofundme.com/f/t8bq2-funeral-expenses Jennings and Ayers Funeral Home and Cremation Services, 820 S. Church Street, Murfreesboro, TN 37130. 615-893-2422 Please leave online condolences at www.jenningsandayers.com.

The family of Joshua "Josh" Toney created this Life Tributes page to make it easy to share your memories.

Send flowers to the Toney family.