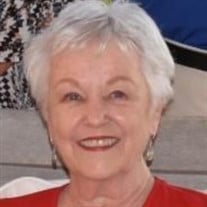 Judy Smith Smith, 82, passed away peacefully April 1, 2020. A native and lifelong resident of Murfreesboro she was the daughter of the late Ewing Edward and Mozelle McCullough Smith. She is survived by her high school sweetheart and husband of 64 years, Thomas E. "Tommy" Smith, IV; sons Rhett (Hopelyn) Smith of Naples, FL, Scott (Kaye) Smith of Sullivan's Island, SC, daughters; Libby (Andy) Wilkins of Bowling Green, KY, and Shannon (Laws) Bouldin of Murfreesboro, and one sister, Milly Peters of Aiken, SC. She is also survived by her beloved grandchildren; Ewing (Bonnie) Smith, Peyton (Meg) Smith, Allie Smith, and Rebecca Blank of Nashville, Ralston Smith and Nell Smith of Sullivan's Island, SC, Chip (Mollie) Wilkins of Bowling Green, KY, Ann-McCullough (Bud) Wilkins Cook of Summerville, SC, Mac Bouldin and MaryGrace Bouldin of Murfreesboro, eight great-grandchildren and numerous dearly loved nieces and nephews. She was predeceased by one brother, Ewing "Tommy" Smith, Jr. and one sister, Nancy Smith Sellers A graduate of Murfreesboro Central High School and Middle Tennessee State University, she was a gifted student who went on to earn a Masters degree from the University of Tennessee all the while with four small children at home. Judy had a remarkable career as the Dean of Women at Middle Tennessee State University until her retirement in 1993. She spent her years in this position as a tireless champion for her students. Her careful and insightful advice was highly sought by the students in her care. She continued to have students reach out to for her wisdom and guidance long after their college days were over. She took particular delight in her role as advisor to both the Panhellenic Council and the MTSU cheerleaders. She relished visits from her former students-- and thoroughly enjoyed hosting many cheerleader reunions and even a wedding at her home. Judy was a gracious hostess who loved nothing more than being surrounded by family and friends. She and Tommy were especially known for the MTSU Homecoming Parade party they hosted for many years on their Main Street lawn. She loved being in Monteagle and relished the times when they were entertaining friends and family on the mountain. She had many loves and second only to her family was her love of bridge. She was an avid bridge player who rarely missed Wednesday Bridge and was still playing weekly with a group that has been playing together for over 40 years. Judy participated on numerous community boards and MTSU committees and proudly served as a Commissioner of the Murfreesboro Housing Authority until her death. A private family burial service will be conducted with internment in Evergreen Cemetery with Michael O'Bannon officiating. A celebration of Judy's life will be held at a later date. Jennings and Ayers Funeral Home is in charge of services. In lieu of flowers the family asks that donations be made to the Dean Judy Smith Scholarship Fund at MTSU,1301 East Main St. Murfreesboro, TN 371320-0001 or Oaklands Association, Inc. 901 N. Maney Ave. Murfreesboro, TN 37130, or the charity of your choice.

Judy Smith Smith, 82, passed away peacefully April 1, 2020. A native and lifelong resident of Murfreesboro she was the daughter of the late Ewing Edward and Mozelle McCullough Smith. She is survived by her high school sweetheart and husband... View Obituary & Service Information

The family of Judy Smith Smith created this Life Tributes page to make it easy to share your memories.

Send flowers to the Smith family.