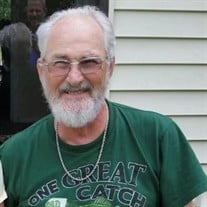 Kenneth Terry Helton was born on October 20, 1941 in Rover, TN to the late Andrew Terry Helton and Mary Josiephine King Helton. His life transitioned peacefully on April 6, 2022 at his home in Murfreesboro, surrounded by family, at the age of 80. In a previous union, he was blessed with three sons and a daughter: Ken Jr, Andy, David “Tony” and Robin. Kenneth was a Christian of Baptist faith. He was also blessed with musical talent and as a young man played guitar in a band called Sundown in the Red Barn in Walter Hill. He recorded two singles, “Don’t Hold Back” and “Times Like This”. He met his wife, Mary at the Red Barn and the two were joined in marriage on January 9, 1981. He retired from Greer Stop Nut after years of service as a maintenance supervisor. He was an avid fisherman, loved camping, going on trips in his RV, visiting family in Florida, traveling to Gatlinburg, listening to country music (especially Merle Haggard) and cars. One of his favorite projects was restoring his mother’s Chevy Nova with the help of his sons. Kenneth was preceded in death by his parents, Andrew Terry Helton and Mary Josiephine King Helton; brother, James Helton; and sisters, Barbara Rooker and Deborah Combs. He is survived by his wife, Mary R. Helton; sons, Kenneth (Juanita) Helton, Jr., Dana “Andy” (Sandra) Helton, David (Robbie) Helton; daughter, Robin Howse (Fred Burton); sixteen grandchildren; twenty five great-grandchildren; and two great-great grandchildren. Visitation will be 9:00 AM until time of chapel service at 11:00 AM, Saturday, April 9, 2022 at Jennings and Ayers Funeral Home with Bro. Richard Radford officiating. Burial will be in Cothran Cemetery with family and friends serving as pallbearers. The family would like to thank Vickie Pendergrast for her many years of dedication and support. The family would also like to thank Alive hospice and his daughter in law, Sandra Helton, for devoted care and support during his transition to his Heavenly home. Jennings and Ayers Funeral Home, 820 S. Church Street, Murfreesboro, TN 37130. 615-893-2422 Please leave online condolences at www.jenningsandayers.com.

Kenneth Terry Helton was born on October 20, 1941 in Rover, TN to the late Andrew Terry Helton and Mary Josiephine King Helton. His life transitioned peacefully on April 6, 2022 at his home in Murfreesboro, surrounded by family, at the age of... View Obituary & Service Information

The family of Kenneth T. Helton created this Life Tributes page to make it easy to share your memories.

Send flowers to the Helton family.