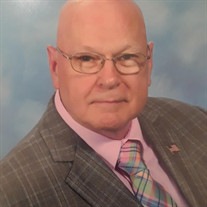 Larry Ralston, age 79 of Murfreesboro, died in the early morning hours Saturday following a brief and unexpected battle with cancer. He was the son of the late James and Ruth Ralston. He was also preceded in death by both of his brothers, James “Little Jimmy” Ralston and Gary Ralston. Larry Ralston, a 32nd Degree Mason, was a lifelong resident of Murfreesboro, TN. He was honorably discharged as a veteran of the U.S. Army. He graduated from Central High School and attended MTSU. He spent more than 50 years as a professional photographer, having been co-owner (with the late Priscilla Ralston) of Ralston Photography. He was very active in several local, state, regional and national professional photographer associations [PPA]. He received numerous awards and distinguished honors for his photography and served as president (and held other officer positions) of various professional organizations throughout his career, including Music City PPA, Tennessee PPA, Southeastern PPA, and the National PPA. In his "golden years" he worked almost 15 years as a night manager of Premiere 6 Theatre. Larry never met a stranger, always met people with a joke and a smile, and was known to adorn a red clown nose to make people laugh. Larry loved socializing with friends, especially when deep fried southern food and Oreos were involved. He had a crippling addiction for Elvis Presley paraphernalia which was only exacerbated by his added Western cowboy addiction later in life. He is survived by his daughter, Sara (Michael) Randall, of Lebanon, TN; his son, Spencer Ralston, of Los Angeles, CA; two granddaughters, Sofia and Emma Randall; nieces and nephews; and numerous beloved cousins and friends. Visitation will begin Saturday, July 31, at 1pm; Memorial Service will begin at 3pm, with Rev. Chris Warren officiating, at Jennings & Ayers Funeral Home, Murfreesboro, TN (615-893-2422). Burial to follow at Roselawn Cemetery. Honorary pallbearers are Sam Goodwin, Charlie Pitts, Charles Ralston, Ronnie Barrett, Fred Goodwin, Dave Gober, and Todd Faulkner. In lieu of flowers, donations can be made to either Larry's GoFundMe (https://www.gofundme.com/f/support-larry-ralston) or to Willowbrook Home Health & Hospice, 1302 N. Main Street, Suite 2A Shelbyville, TN 37160 (931-246-9300). Jennings & Ayers Funeral Home and Cremation, 820 South Church Street, Murfreesboro, TN 37130. 615-893-2422. Plese leave online condolences for the family at www.jenningsandayers.com

Larry Ralston, age 79 of Murfreesboro, died in the early morning hours Saturday following a brief and unexpected battle with cancer. He was the son of the late James and Ruth Ralston. He was also preceded in death by both of his brothers,... View Obituary & Service Information

The family of Larry Ralston created this Life Tributes page to make it easy to share your memories.

Larry Ralston, age 79 of Murfreesboro, died in the early morning...

Send flowers to the Ralston family.