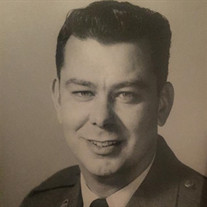 Retired SMSGT Larry Artie Zachary, age 82, passed to be with his Lord Jesus on Monday, September 9, 2019. Larry was born April 11, 1937 on a farm in Ladoga, Montgomery County, Indiana to the late Samuel Gareld and Roberta L. Wilshire Zachary. Larry was a 1955 graduate of New Market Indiana High School. He joined the United States Air Force in November 1955 and retired December 1975. He was stationed at Sewart Air Force Base in Smyrna, TN. He met the love of his life, Bobbie Anna Pardon, before being assigned to a NATO Base in Fontainebleau, France. He sent for her, and they were married in France September 8, 1962. Larry was a member of NATO 0-2 Rifle Drill Team, marched in the Nijmegen Holland 100 Mile March, and manager of the U.S. Airmen’s Club. He served 3 tours in Vietnam, as well as tours in Taiwan and Thailand. He was awarded the Bronze Star, six Air Force commendation medals, and other service medals during his service. Larry also retired from Alvin C. York, VA Medical Center in Murfreesboro, TN as the Chief of S&D, Supply Department after 23 years. Then he retired after six years under Tommy Sanford’s administration as Deputy Assessor from Rutherford County Property Assessment. Larry was a faithful member of Lock’s Memorial United Methodist Church in the Almaville community. At Lock’s he was the Sunshine Man, UMYF director, choir director and worship leader for several years. He was also a 25 year charter member at Almaville Community Club, a 9 year term president, and the “Almaville Sounds” Director and Emcee for 16 years. Larry was a 50+ year Mason and member of the Mt. Moriah #18 Lodge in Murfreesboro, a 32 degree Scottish Rite Mason, and a Shriner at Al Menah Temple in Nashville. He was a past president and secretary of the Murfreesboro Shrine Club. Larry was preceded in death by his parents; two infant brothers, an older brother, Jerome; and sisters, Jean Revell, Sharane Ryan and half-sister, Mary Ellen Johnston. He is survived by one sister, Kay Bradbury of Colorado; three daughters, Vonda Poole (Patrick) of Nunnely, TN, Lisa Hayes (Ralph) of Smyrna, TN and Zabreta Reed (Tony) of Manchester, TN; six grandchildren, Zachary Collins, Tyler Collins (Tabby), Katie Parker, Kristy Lenard (Taylor), Eric Hayes and Jessica Hayes; 3 great-grandchildren, Brendan, Brooklyn and Amelia Collins and future baby boy, Collins. He is survived by his dearly beloved and wonderful and ever-loving wife, Bobbie Anna Pardon Zachary. They shared 57 years together. Larry was an admirer of his children, grand, and great-grandchildren. He loved his extended family of cousins, nieces and nephews, especially Danny Floyd who, although not related by blood, will always be Larry’s son. He has lifelong high school friends, Arlie and Linda Thompson of Crawfordsville, Indiana. Most people enjoyed his “people person” attitude and wonderful smile. He has said “you can take the boy off the farm, but you can’t take the country out of the man.” He often claimed his biggest love was his four special women of his life: his wife and daughters. Visitation with the family will be 5:00-8:00 PM, Friday, September 13, 2019 at Jennings and Ayers Funeral Home. Chapel service will be 1:00 PM, Saturday, September 14, 2019 at Jennings and Ayers with Bro. Barry Culbertson officiating. Burial will follow in Roselawn Memorial Gardens with full military honors. Family and friends will serve as pallbearers. Arrangements are under the direction of Jennings and Ayers Funeral Home and Cremation Services, 820 South Church St., Murfreesboro, TN 37130. 615-893-2422. Please leave online condolences at www.jenningsandayers.com.

The family of Larry Artie Zachary created this Life Tributes page to make it easy to share your memories.

Retired SMSGT Larry Artie Zachary, age 82, passed to be with...

Send flowers to the Zachary family.