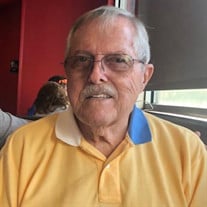 Lloyd L. Lewis of Murfreesboro, TN died quietly in his sleep on March 28, 2021. Lloyd was born and raised in Gary, Indiana, the second of four boys born to Jesse and Pauline Lewis. He attended Wirt High School, where he lettered in basketball and football, and following graduation enlisted in the Army, where he served honorably in the aftermath of the Korean War. Following his military service, he attended Kansas State Teachers College in Pittsburg, Kansas. There he met the love of his life, Bonnie Jane Arthur, and they were married March 3, 1958. They moved back to his home in Indiana, where he went to work for GMAC, the financing branch of General Motors. He worked there for 40 years, he and Bonnie raising two boys in Carmel, Indiana, then later moving to Minnesota, and then to Murfreesboro in 1989. He retired from GMAC in 1992, but kept very active helping Bonnie with her thriving business as an antique dealer. They had a happy life attending auctions, buying and selling antiques, and Lloyd was her able assistant, in charge of hauling and often refinishing the furniture. They had a deep and abiding love for each other, and were married 50 years before Bonnie succumbed to cancer. Since her death in 2009, Lloyd continued the antique business and remained vibrant and strong until the very end. During his life, Lloyd was involved as a Boy Scout leader, a little league baseball coach, an active member of his church, and a leader in his neighborhood association. But the real joy of his life was being with his wife, Bonnie, his children, his 5 grandchildren and 6 great-grandchildren. His passing leaves a vast emptiness in all of our lives. Lloyd was preceded in death by his father, Jesse C. Lewis of Gary, Indiana, later Port Charlotte, Florida, his mother, Pauline Williams Lewis, born in McMinnville, Tennessee, and his brother Glen Lewis. He is survived by his brothers, Clifford (Dorothy) Lewis of Lafayette, Indiana, and Thomas (Barbara) Lewis of Chesterton, Indiana, his sons, Lloyd Lewis, Jr. (wife, Beth) of Shelbyville, Indiana and Lon Lewis of Valparaiso, Florida. Also surviving, are his grandchildren Lauren (Lewis) O’Shea, husband Michael, and their children, Declan and Alice of Elmhurst, Illinois, Daniel Lewis, wife Nora and their children, Evelyn, Barrett, Audrey and Margaret of La Grange, Illinois, and Morgan Lewis of Indianapolis, Indiana, as well as Emily Lewis (fiancé, Matt) of Westfield, New York and Madline Lewis of Jacksonville, Florida. Visitation with the family will be from 10:00 AM until service time at 11:00 AM on Saturday, April 3, 2021 at Jennings and Ayers Funeral Home with Dr. John Vile officiating. Jennings and Ayers Funeral Home and Cremation, 820 S. Church Street, Murfreesboro, TN 37130. 615-893-2422 Please leave online condolences at www.jenningsandayers.com

Lloyd L. Lewis of Murfreesboro, TN died quietly in his sleep on March 28, 2021. Lloyd was born and raised in Gary, Indiana, the second of four boys born to Jesse and Pauline Lewis. He attended Wirt High School, where he lettered in basketball... View Obituary & Service Information

The family of Lloyd L. Lewis created this Life Tributes page to make it easy to share your memories.

Send flowers to the Lewis family.