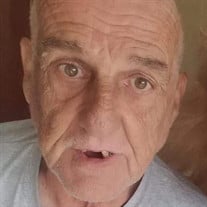 Mason Eurie Davenport (73) born April 24, 1948 in Madison, TN. Although he was born and raised in Davidson/Sumner County, Mason moved to Murfreesboro/Rutherford County in 1966. Mason went to meet his Lord and Savior on June 1, 2021. Mason was the first-born child to the late Joe “Cephus” and Cassie “Lorrine” Key Davenport. He was the 8th of a combined 13 children. Along with serving his country in the U.S. Army National Guard, Mason chose professions in over the road truck driving and served many years as a private security guard. Most that knew Mason just called him “Davenport.” Mason was loved and well-liked by all. He was always the center of all joke telling. During his late years, he was considered the Huddle House comedian and was known by his coffee order – cup of black coffee only ¾ full with a splash of cold water, a man’s coffee he’d say. Being the colorful, unpolished, unrefined uncle that he was, he often told all his nieces and nephews what their parents didn’t want their children to know as a kid. Needless to say, he was a favorite to many. Mason was preceded in death by his parents, Cephus and Lorrine Davenport; wife, Ann Davenport; siblings, Homer, Charles and Wendell McQuiston, Helen (Buck) O’Neal, Gladys (Hubert) Elgin, Catherine (Jerry) Gammon, Carolyn Humphrey, Freddy Davenport and Carl (Maggie) Davenport; brother-in-laws, Larry Brothers and Rod Willis along with several nieces and nephews. Mason is survived by his sisters, Judy Brothers (primary caretaker) and Joann Willis and his brothers-in-law, Glenn Climer and Mike Humphrey and his step-children. Mason shared a special bond, memories, joke telling’s and special times with numerous nieces and nephews, great nieces and nephews and great-great nieces and nephews. In his later years, Mason was exceptionally close to Paul Brothers (who was his caretaker), Chris Brothers, Bubba Climer, Charlie Climer, Lonnie Lovvorn, Tammy Sanchez, Ruby Climer, Cassie Climer and the late Jackie Mangrum. With much respect, Mason considered Larry Brothers, Hubert Elgin, Maggie Davenport, Rod Willis and Glenn Climer as his own siblings, just more family to have. Visitation with the family will be 12:00 PM until time of funeral service at 2:00 PM, Saturday, June 5, 2021 at Jennings and Ayers Funeral Home with Dr. Lenny Farmer officiating. In lieu of flowers, donations may be made to Jennings and Ayers to help with the cost of the funeral. Jennings and Ayers Funeral Home and Cremation Services, 820 S. Church Street, Murfreesboro, TN 37130. 615-893-2422 Please leave online condolences at www.jenningsandayers.com.

Mason Eurie Davenport (73) born April 24, 1948 in Madison, TN. Although he was born and raised in Davidson/Sumner County, Mason moved to Murfreesboro/Rutherford County in 1966. Mason went to meet his Lord and Savior on June 1, 2021. Mason was... View Obituary & Service Information

The family of Mason Eurie Davenport created this Life Tributes page to make it easy to share your memories.

Send flowers to the Davenport family.