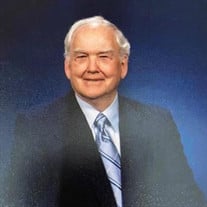 Matt Henderson, passed away April 13, 2021 at his residence. Matt was successful at most things he wanted to conquer even with the most formidable foes, illness and old age. Nonetheless, one lovely spring afternoon at the age of 91, surrounded by his family, he moved on. He now lives with us in memory and spirit; his love remains forever. Born and raised in Murfreesboro, Tennessee, Matt Whitaker Henderson, Sr., traveled the world with his loving wife of 71 years, Maxine Woodson Henderson, but he was always eager to return to his home and family. He was preceded in death by his parents, Dr. W.T. Henderson and Florence Jarratt Henderson of Salem. His love remains in his children, Dr. Rita Henderson-Slayden of White Bluff, Matt Whitaker Henderson, Jr. of Murfreesboro, and Jeannie Henderson Hoover of Knoxville; his grandchildren, Kerri Henderson Mason, Kathryn Slayden Pardo, Virginia Hoover Plunkett, Whitney Henderson Raque, Matt Henderson III, Mathias Hoover, Dillion Henderson, and seven great grandchildren. He is also survived by one brother, John Henderson of Murfreesboro. Matt attended Baylor Military School in Chattanooga, Battle Ground Academy in Franklin and MTSU. He was an active member of The First United Methodist Church for 68 years. He was best known for his gentle nature and quick retorts. He loved a good meal and his Thursday night pool game. Matt was a gifted and successful businessman with his amazing work ethic, always showing up for work by 6am every week morning. He owned and operated Henderson Oil Company for 46 years and managed Henderson Family Properties well into his retirement years. There will be a family celebration of life on his birthday in July when his ashes will be interred with the Reverend, Dr. Bill Henderson officiating. Jennings and Ayers Funeral Home and Cremation, 820 S. Church Street, Murfreesboro, TN 37130. 615-893-2422 Please leave online condolences at www.jenningsandayers.com

Matt Henderson, passed away April 13, 2021 at his residence. Matt was successful at most things he wanted to conquer even with the most formidable foes, illness and old age. Nonetheless, one lovely spring afternoon at the age of 91, surrounded... View Obituary & Service Information

The family of Matt Whitaker Henderson Sr created this Life Tributes page to make it easy to share your memories.

Send flowers to the Henderson family.