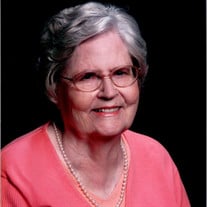 Mildred Maxine Strickland McMillion died on Saturday, June 20, 2020, at the age of 96 in Murfreesboro, Tennessee. She was born on January 28, 1924 in Holcut, Miss., to Andrew and Ludie Lambert Strickland. One of nine children, she was raised in Tishomingo, Miss. After high school, she worked briefly as a telephone operator and was then recruited by the federal government to go to Washington D.C. and work for the FBI. It was in Washington that she met her future husband, Ovid Miller McMillion, an Army intelligence officer and college geography professor. They moved to Murfreesboro in 1966, when her husband joined the faculty at Middle Tennessee State University. Once settled in Murfreesboro, she joined the Women’s Club of Murfreesboro and became a member of the MTSU Dames Club. She was also an active member of the First United Methodist Church, where she taught Sunday school and co-founded the church’s Book Talk. She came to her love of books naturally, since she grew up in a family of imaginative storytellers. She used this skill to entertain her children and later her grandchildren with her tales of small-town life and her adventures growing up with eight brothers and sisters. In addition to books, she also enjoyed traveling, and over the course of her 42 years of marriage she made frequent trips across the United States, Europe, and Latin America. After her husband’s death in 1992, she continued to travel with her grown children, visiting the Mediterranean, Australia, New Zealand, Hawaii, Alaska and elsewhere. She moved to Adams Place in 2000 and resided there until her passing. She was preceded in death by her husband, Ovid Miller McMillion; her sisters Inez Chittom, Montez Trimm, Quay Rushing, Vera Parnell, and Ruth Jenkins; and brothers Waymon Strickland, R.C. Strickland, and Eural Wayne Strickland. She is survived by her four children: Thalia McMillion and her husband Gerry Wright of Boston, Mass.; Rhonda McMillion and her husband David Whiteman of Washington, D.C.; Jennifer McMillion and her husband John Pitcher of Hendersonville, Tenn.; and her son Andrew McMillion of Johnson City, Tenn. She was a proud grandmother of five grandchildren: Matthew Wright and his wife Jennifer Do of New York City; Emily Olga Wright and her partner Emanuel Valerio of Boston, Mass.; Ethan Whiteman and his partner Jordan Kemmer of Washington, D.C.; and Jonah and Austin Pitcher of Hendersonville, Tenn. She also leaves many nieces and nephews and great nieces and nephews. The family is grateful for the loving care that Adams Place Assisted Living provided to Mildred over the past several years. The family is also thankful for the services provided by the staff of Senior Helpers. Due to COVID concerns, the service will be private. In lieu of flowers, donations may be sent to Dolly Parton's Imagination Library in recognition of Mildred’s love of children and books. Donations can be made at donate.imaginationlibrary.com. Arrangements are under the direction of Jennings and Ayers Funeral Home and Cremation Services, 820 South Church Street., Murfreesboro, TN 37130. 615-893-2422. Please leave online condolences at www.jenningsandayers.com.

Mildred Maxine Strickland McMillion died on Saturday, June 20, 2020, at the age of 96 in Murfreesboro, Tennessee. She was born on January 28, 1924 in Holcut, Miss., to Andrew and Ludie Lambert Strickland. One of nine children, she was raised... View Obituary & Service Information

The family of Mildred Maxine McMillion created this Life Tributes page to make it easy to share your memories.

Send flowers to the McMillion family.