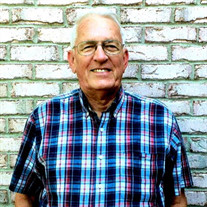 Neville Franklin “Frank” Stephenson, age 77, of Murfreesboro, TN passed away on June 27, 2021 of pancreatic cancer in his home surrounded by his family. Frank was a native of Eula (Clyde), Callahan County, Texas. He was born on January 29, 1944 to Neville “Neb” and Roberta Stephenson of Eula, TX and was an only child. He was the grandson of the late R.P. and Alice Miller Stephenson who were early settlers in the Eula community. He was also the grandson of Robert and Annie Slough. Frank grew up on the family farm at Eula, and he graduated in 1962 from Eula High School, where he participated in various sports. He then attended McMurry College (now university) and graduated with a BBA in marketing in January of 1967. Frank began his career working for Gulf Oil Corporation in west Texas followed by a brief time with General Dynamics Corporation in Fort Worth, Texas on the F-111 program. Frank then began a 41+ year career in the insurance industry in 1968 spending time as a multi-line claims adjuster, marketing specialist, and for the final 29 years as a marketing/underwriter specialist with MOAC and Liberty Mutual Insurance Companies in the commercial Inland Marine business. Frank developed an interest in aviation early in life which resulted in his involvement in several aviation museum projects and becoming a pilot/aircraft owner in 1983. Frank enjoyed flying his several aircraft, going on vacation with his wife, Becky, and spending time with fellow pilots. Frank was an active member of the Experimental Aircraft Association (EAA), Aircraft Owners and Pilots Association (AOPA), the International Cessna 170 Association, Wings Over the Border as well as numerous other aviation organizations. In 1971, while on a trip to Hawaii, Frank met the love of his life, Becky Duncan Hunter, who was also vacationing there. They learned that they both lived in Texas, and after a year of dating, he and Becky were married on May 13, 1972 in Fort Worth, Texas at the Botanical Gardens. To their union came a very special daughter, Amy Dawn, on November 6, 1976. Later on in life Amy blessed them with a fine son-in-law, Clint Houghton, and then later, two very special grandsons, Brett Hunter Houghton and Carter Reed Houghton. The simplest of pleasures brought Frank great joy. He loved good Tex-Mex food (from Texas), homemade ice cream, enjoying nature, spending time with family and friends, and of course, flying. Frank was loved by many, and will be greatly missed. Frank was preceded in death by his parents, Neville Hampton Stephenson and Dorothea Roberta Slough Stephenson. He is survived by his wife, Becky Stephenson; daughter, Amy Dawn Houghton; son-in-law, Clint Houghton; and grandsons, Brett Hunter Houghton and Carter Reed Houghton. A memorial service will be held at a later date. Jennings and Ayers Funeral Home and Cremation Services, 820 S. Church Street, Murfreesboro, TN 37130. 615-893-2422 Please leave online condolences at www.jenningsandayers.com.

Neville Franklin &#8220;Frank&#8221; Stephenson, age 77, of Murfreesboro, TN passed away on June 27, 2021 of pancreatic cancer in his home surrounded by his family. Frank was a native of Eula (Clyde), Callahan County, Texas. He was born on January... View Obituary & Service Information

The family of Neville Franklin "Frank" Stephenson created this Life Tributes page to make it easy to share your memories.

Send flowers to the Stephenson family.