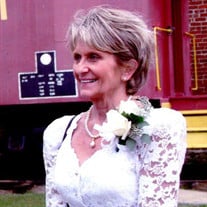 Mona “Pat” Patricia Livingston, age 83, passed away at Adams Place Health Care October 14, 2020. Pat was born in Greene County, Tennessee on January 20th, 1937. She graduated from McDonald High School in 1955 and continued her education at the Greeneville Business College where she received her Book Keeping Degree. Soon after completing her degree she married Don Rudolph Livingston and remained married for 56 years. During the early years of their marriage they lived in a small house in Greenville, Tennessee where Don worked at the Magnavox Company. Throughout the years, they moved several times throughout the South East as Don was promoted within Magnavox. Their last move was to Murfreesboro, Tennessee in 1974 where they lived a rich and prosperous life with each other. She was a member of First Baptist Church and Bridge Club. Pat lived an active lifestyle including tennis, travel, weekly bridge games and physical exercise. She was very energetic and full of life. She spent a lot of her time devoted to raising 3 active children and caring for her home along with her devoted husband, Don R. Livingston. She was very dedicated to things that she felt were important including daily workouts at the Murfreesboro Athletic Club, years of playing tennis with other tennis enthusiast, as well as, watching Wimbledon each year while cheering on her favorite player. She and her husband Don had many fun filled adventures with their world travels, traveling both domestic and internationally with trips associated with Don’s many years with Magnavox. Tennessee football was another pastime that Pat enjoyed, always ready to tailgate in the parking lot at Neyland Stadium in Knoxville or watching at home in the presence of family and friends. Even if the Volunteers were not always victorious it really didn’t matter ... most important to Pat was the feel good feeling of getting together with fellow UT fans and eat some forbidden goodies during the game which would always and forever lead to another workout session at the MAC. She was loved by all who had the privilege of knowing her and will be missed by all. Pat was preceded in death by her parents, Davis Edward and Anna Mae Riley Easterly; husband, Don Rudolph Livingston in 2012. She is survived by her children, Gary Michael Livingston of Murfreesboro, Pamela (Chris) Kay Livingston Way of St Augustine, FL, Benjamin (Paige) Edward Livingston of Lascassas; sister, Janice (Ed) Treadway of St Augustine, FL.; and grandchildren, Travis (Margaret) Livingston of Jackson, Casey Livingston of Murfreesboro, Ashley (Justin) Williams of St Augustine, FL, Cameron (Betsy) T. Weldy of Birmingham, AL, Christian R. Weldy of Lewisville, TX. Visitation with the family will be 1:00 until time of funeral service at 3:00 PM, Sunday, October 18, 2020 at Jennings and Ayers Funeral Home with Pastor Ron Kairdolf officiating. Burial will follow in Evergreen Cemetery with family and friends serving as pallbearers. In lieu of flowers, donations may be made to the American Lung Association, 1 Vantage Way, Suite C120, Nashville, Tn 37228, www.lung.org. Jennings and Ayers Funeral Home and Cremation, 820 S. Church Street, Murfreesboro, TN 37130. 615-893-2422 Please leave online condolences at www.jenningsandayers.com

The family of Pat Livingston created this Life Tributes page to make it easy to share your memories.

Send flowers to the Livingston family.