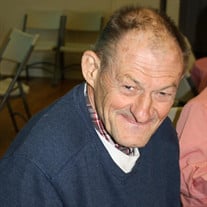 One of the best things you can say about a person when they pass away is, “Things won’t be the same without them.” That means a person has affected others so greatly that their perception of places and times will always be colored by their absence. Paul Baines was one of those people. Paul was a complex man who loved his friends, peers, and family. So much so that he would become jealous when he believed someone else was taking the attention of one of his favorite people and would tell them to “go on” or “get out of here.” If he cared about you, he would volunteer to run errands to the end of the earth for you and would remember your name no matter how long you used to live or worked with him. If he didn’t, there was nothing you could do to gain his favor. Paul enjoyed going to look at lawn mowers and tractors and in another life, he definitely would have taken pride over having the best lawn in his neighborhood. His happy place was pushing his lawnmower meticulously over each blade of grass, cutting it to perfection. He loved his tractor collection and would often methodically arrange them on his bed and sleep with one in his bed at night. When asked why he would just say in his deep booming voice, “I don’t know, I just love tractors!” Before it became trendy, Paul was a fashion trailblazer who looked forward to coming home after a long day at the center and slipping into his favorite dress to get comfortable. And if you had a problem with that, it was your problem, not his. He liked going to “Fish-Fil-A” (aka Chic-Fil-A), and there was nothing he enjoyed so much as a good meal with one of his favorite people. Whether it was a smoothie from McDonald’s, or a large Sweet Tea, he always knew exactly what he wanted and from whom he needed to get it. Paul leaves behind not only a house full of memories and people who knew and loved him, but also everyone who smiles when they think of their favorite “Paul Baines Memory.” So yes, one of the best things you can say about a person when they pass away is, “Things won’t be the same without them.” Workshop won’t be the same. Pennington won’t be the same. Stones River Center won’t be the same. Our lives won’t be the same. We just know that he’s in heaven, cutting the grass in his favorite dress, smiling down at us all. Hopefully with some “Fish-Fil-A.” We’ll miss you Paul. Jennings and Ayers Funeral Home and Cremation, 820 S. Church Street, Murfreesboro, TN 37130. 615-893-2422 Please leave online condolences at www.jenningsandayers.com

One of the best things you can say about a person when they pass away is, &#8220;Things won&#8217;t be the same without them.&#8221; That means a person has affected others so greatly that their perception of places and times will always be... View Obituary & Service Information

The family of Paul Baines created this Life Tributes page to make it easy to share your memories.

One of the best things you can say about a person when they pass...

Send flowers to the Baines family.