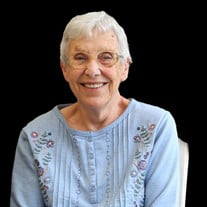 Obituary for Pauline Perry Pauline Jean Perry, January 25, 1935-March 26, 2022 Pauline was born in London, England, to the late Charles William and Cecelia Helen Hartnip French. She was one of 5 children who, during WW2 moved to Connah’s Quay, North Wales. Pauline had 3 sisters, the late Margaret Pearson, Queenie Akers, and Sheila Moore. Her 2 brothers were the late Charles French and Allen French. Pauline married the love of her life, the late David Eugene Perry, after meeting him in North Wales where he was stationed in the Air Force. Not long after their first child, Lana Diane Perry Ferrell, was born, Pauline left her home and they moved to the states. A son, David Wayne Perry, would come 9 years later while stationed in France. Pauline is survived by her children, one grandchild, Amber Leanne Ferrell Cowan (Wayne Cowan), two great granddaughters, Carson Gray and Maggie Greer Cowan, and special fur baby Zoe. She is also survived by several special nieces and nephews. She was Nannie to Amber and Wayne, and GiGi to Carson and Maggie. She was their whole world, as they were hers. If you truly knew Pauline, you knew what a ball of energy she was. She loved playing bingo, watching Jeopardy, coffee, dot to dots, and her family. You always knew exactly where you stood with Pauline. She said what was on her mind at all times, and everyone respected her for it. To know her was to love her. Her life definitely wasn’t easy, but you’d never know it from the strength and dignity she portrayed. She will be greatly missed! The visitation with the family will be from 4:00 p.m. until 7:00 p.m. on Tuesday, March 29, 2022 at Jennings & Ayers. The graveside service at Roselawn Memorial Gardens will be at 11:00 a.m. on Wednesday, March 30, 2022. Jennings and Ayers Funeral Home, 820 S. Church Street, Murfreesboro, TN 37130. 615-893-2422 Please leave online condolences at www.jenningsandayers.com.

Obituary for Pauline Perry Pauline Jean Perry, January 25, 1935-March 26, 2022 Pauline was born in London, England, to the late Charles William and Cecelia Helen Hartnip French. She was one of 5 children who, during WW2 moved to Connah&#8217;s... View Obituary & Service Information

The family of Pauline Jean Perry created this Life Tributes page to make it easy to share your memories.

Send flowers to the Perry family.