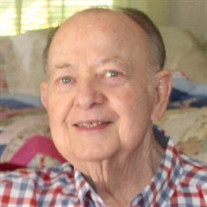 Robert Nelson Jenkins, age 83, passed away on Sunday July 18, 2021 in Murfreesboro, Tennessee. He was a native of Lebanon, Tn and has lived in Murfreesboro for the last 57 years. He was a long-time member of Kingwood Church of Christ, and was retired from a very successful 31 year career in the insurance business with Liberty National Life Insurance Company. Robert never met a stranger, and for most who knew him, he was the most kind, witty, and compassionate man they’ve ever known. Robert loved his family unconditionally, and he was on top of the world when surrounded by them. With every moment of life he had with them, he was the most awesome and constant example of what a loving husband, father, grandfather, brother, and friend is to be. Robert was preceded in death by parents, Seaton and Buna Jenkins of Lebanon; brothers, Ponie Lee, Conie, Garland, James, Charles; and sisters, Polly George and Margaret Agee. He was also preceded in death by his loving wife Ann Bentley Jenkins who he missed dearly, as well as granddaughter Hannah Davenport. Robert is survived by his son, Robert Nelson Jenkins Jr. (Bobby) and his wife Sandra of Murfreesboro; daughters, Lisa Rhodes (Greg) and Rachel Davenport both of Murfreesboro; four grandchildren, Summer Jenkins, Robert Nelson Jenkins III (Rob), Hayden Davenport and Hunter Davenport. Additionally, survived by one brother and best friend Walter Jenkins (Linda), several much- adored nieces and nephews, and very special friends Sandra Hamilton and Lynn Hamilton. A very special thanks to Stones River Manor and it’s entire staff for their special care and especially their love shown for him while he was there for the last two years. In lieu of flowers memorials may be made Stones River Manor in his honor. Visitation with family and friends will be Friday, July 23, 2021 at Jennings & Ayers Funeral Home in Murfreesboro from 10:00 AM to 12:00 PM with funeral service to follow at 12:00 PM with bro. Jim Creech officiating. Burial will follow at Cedar Grove Cemetery in Lebanon, Tennessee with Grandsons and Nephews serving as pallbearers. Jennings & Ayers Funeral Home and Cremation, 820 South Church Street, Murfreesboro, TN 37130. 615-893-2422. Please leave online condolences for the family at www.jenningsandayers.com

Robert Nelson Jenkins, age 83, passed away on Sunday July 18, 2021 in Murfreesboro, Tennessee. He was a native of Lebanon, Tn and has lived in Murfreesboro for the last 57 years. He was a long-time member of Kingwood Church of Christ, and was... View Obituary & Service Information

The family of ROBERT N. JENKINS created this Life Tributes page to make it easy to share your memories.

Send flowers to the JENKINS family.