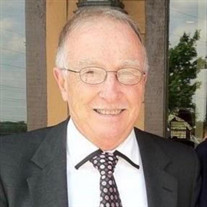 Robert Chester Power went to Heaven unexpectedly on May 26, 2020 while at home in Milton. Chester was born on July 11, 1937 in East Nashville, the neighborhood where he met friends and future bandmates who would become Nashville’s first rock and roll band, The Casuals. As a young musician of the 1950s, not only did he sharpen his piano and organ skills, but he was also acquainted with his beloved Joyce Lee Strickland. They were married in 1958 and welcomed their daughter Joni in the following years. Together, the Powers became dedicated Christians in early ‘70s, and Chester was called to repurpose his musical talent for anointed worship. He served faithfully as a musician in a number of churches and organizations, including the Lord’s Chapel, Full Gospel Business Men’s Fellowship, and most recently, His Gathering, in Nashville. In addition to his long administrative career in the freight industry, Chester was also a prolific visual artist, with more than 100 oil paintings placed in residences and commercial businesses. He also spent his retirement enjoying time with his family, adapting to life in the country, and taking much-loved trips to the beach. He was a source of strength, peace, and wisdom for everyone who knew him. He is preceded in death by his parents, Chester and Marie, as well as two sisters, Chestine and Verna Jean. Chester is survived by his wife of 62 years, Joyce, and their daughter Joni Downing and her husband Ricky of Milton, TN; grandchildren Nathan (Cathy) Downing, Krissy (Tony) Burch of Murfreesboro, and Chad Downing of Milton; great-grandchildren Owen, Logan, Colin, and Roman; sister Peggy Pirtle; and a host of friends. Visitation with the family will be 2:00 PM until time of memorial service at 3:00 PM, Sunday, May 31, 2020 at Jennings and Ayers Funeral Home with Ben Hall and Pastor Jimmie Snow officiating. Arrangements are under the direction of Jennings and Ayers Funeral Home and Cremation Services, 820 South Church St., Murfreesboro, TN 37130. 615-893-2422. Please leave online condolences at www.jenningsandayers.com.

Robert Chester Power went to Heaven unexpectedly on May 26, 2020 while at home in Milton. Chester was born on July 11, 1937 in East Nashville, the neighborhood where he met friends and future bandmates who would become Nashville&#8217;s first... View Obituary & Service Information

The family of Robert Chester Power created this Life Tributes page to make it easy to share your memories.

Robert Chester Power went to Heaven unexpectedly on May 26, 2020...

Send flowers to the Power family.