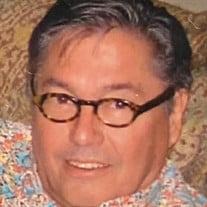 Russell Clark McAdoo, fondly known as “Mac,” 75, of Murfreesboro, Tennessee passed away on August 20th, 2020 after a hard-fought battle with leukemia. He was born on January 8th, 1945 in Woodbury, Tennessee. He graduated from Central High School in 1963, followed by Middle Tennessee State University. Russell also had a masters in economics from Middle Tennessee State University. In the 1970s, Russell co-owned McAdoo's Men’s Clothing store and went on to be a stockbroker, eventually landing at Wiley Brothers. He is the son of the late Elbert Clark McAdoo and Stella Faye Jones McAdoo. He is survived by his son Colin McAdoo (Jennifer) and three grandchildren Peyton, Paxton and Piper along with his brother, John William McAdoo (Carol) and niece, Carrie McAdoo. Additionally, Russell is survived by his beloved, dear, friend, Jane Wallace Jones. He was preceded in death by his brother, David Jackson McAdoo and beautiful grandson Parker McAdoo. Always a humble, thoughtful, gentlemen, music and art lover, avid reader and learner, Russell’s final request was for his friends and family to spend time together for a cocktail celebration at Five Senses Restaurant (1602 W Northfield Blvd, Murfreesboro), where he was a loyal customer. Please join them on Saturday, August 29th from 2 p.m. until 4 p.m. In the future, his ashes will be spread in Vail, Russell’s favorite home away from home. Memorials may be made to the Jesse Beesley Animal Foundation (2215 Keeneland Commercial Boulevard, 37127) in memory of his cherished dog, Spanky or Alive Hospice (1629 Williams Drive, 37129) in lieu of flowers.

Russell Clark McAdoo, fondly known as &#8220;Mac,&#8221; 75, of Murfreesboro, Tennessee passed away on August 20th, 2020 after a hard-fought battle with leukemia. He was born on January 8th, 1945 in Woodbury, Tennessee. He graduated from Central... View Obituary & Service Information

The family of Russell Clark McAdoo created this Life Tributes page to make it easy to share your memories.

Send flowers to the McAdoo family.