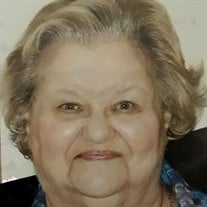 Mrs. Sidney Ann Porterfield, age 85, of Murfreesboro, TN went to be with the Lord on Thursday evening, November 5, 2020. She was born in Knoxville, TN to the late Mr. and Mrs. J.S. Burkhart on January 23, 1935. On January 28, 1961 she wed Wendell J. Porterfield, Jr. at the Wesley Foundation Chapel in Knoxville. She is survived by her husband of over 59 years, and their three sons: Wendell J. Porterfield, III of Murfreesboro, Kendell S. Porterfield and his wife Melissa of Murfreesboro, and Lendell W. Porterfield and wife Laura of Reston, VA, six grandchildren and John Hackney who was like a son. She is also survived by her sister, Sue Burkhart of Bradenton, FL. She spent her young professional career working at National Life and Accident Insurance Company and was an active member of First United Methodist Church where she was a member of the choir for many years. Sidney Ann was a dedicated wife, mother and grandmother and committed to community service. While her greatest joys were her children and grandchildren, it should be said, that she loved all children. She was an active member of the PTA and could often be found assisting at schools events, and even filled in as substitute teacher every now and then. She was a founding member of the Murfreesboro Lioness Club and helped organize and manage the annual Lioness Sight Run for over 22 years. She also served as the President and Treasurer and was honored for her perfect attendance and service. In addition, she was an active member of the Murfreesboro Grange Garden Club. The family would like to extend their heartfelt thanks to Avalon Hospice for their wonderful care of Mrs. Porterfield. Family and friends are invited to Jennings & Ayers Funeral Home, 820 South Church Street, Murfreesboro on Tuesday, November 10th from 4-7 p.m. for visitation. A funeral service will be held on Wednesday, November 11th at 10 a.m. at Jennings & Ayers followed by the burial at Milton Cemetery. Please leave online condolences at www.jenningsandayers.com Jennings & Ayers Funeral Home, 820 South Church Street, Murfreesboro, TN 37130. 615-893-2422

The family of Sidney Ann Porterfield created this Life Tributes page to make it easy to share your memories.

Send flowers to the Porterfield family.