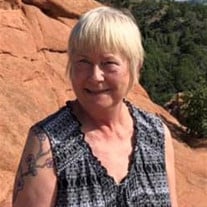 Terrie Lynn Escoe Hurtt, 65, of Murfreesboro, TN, passed away unexpectedly on Friday, February 4, 2022 at Ascension St. Thomas. She was born on August 10, 1956, in Greenwood, SC, one of three daughters and one son of Nancy and Maxey Escoe. She graduated from Greenwood High School in 1974. On February 21, 1982, she entered into marriage with David Lewis Hurtt of Clarksville, TN.. Terrie served 8 years in the United States Army Reserves, achieving the rank of Sergeant before being discharged to give birth to her son. She and her husband settled in Murfreesboro in November 1984 to start a family. Terrie served the community for 7 years at the Murfreesboro Police Department, working with the Department’s finest detectives. She also worked at State Farm before retiring to spend more time with her family. Always curious and eager to learn, Terrie was the first in her family to graduate from college, completing a bachelor’s degree in graphic design from Middle Tennessee State University in 1999. She was a vociferous reader who could almost always be found with the latest Stephen King or Dean Koontz tome, or some supernatural teen fiction – her guilty pleasure. She is survived by her parents, her sisters Debbie Grogan and Lisa Major, her brother Vance Escoe, her loving husband David, her two children Matthew Hurtt and Kristi (Bryan) Wilson, her granddaughter Ariel Franklin, and her protective dog Bandit. There are no plans for a public ceremony at this time. If you’d like to make a donation in memory of Terrie, please consider the Pet Adoption Welfare Service (PAWS) or Rutherford County or an animal shelter special to you. Arrangements are being handled by Jennings and Ayers Funeral Home and Cremation Services; 820 South Church St. Murfreesboro, TN 37130 (615)893-2422. Please leave condolences at www.jenningsandayers.com.

Terrie Lynn Escoe Hurtt, 65, of Murfreesboro, TN, passed away unexpectedly on Friday, February 4, 2022 at Ascension St. Thomas. She was born on August 10, 1956, in Greenwood, SC, one of three daughters and one son of Nancy and Maxey Escoe.... View Obituary & Service Information

The family of Terrie E Hurtt created this Life Tributes page to make it easy to share your memories.

Send flowers to the Hurtt family.