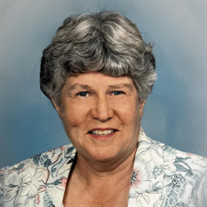 Theodora Carla Gammans, the mother of 11 children died September 7th, 2021 in Murfreesboro, TN. She is survived by nine of her children, Nelson James Gammans, Jr. (Debra), Emily Gammans Restifo (Philip), Jonathan Gammans (Maura), Gregory Gammans (Brenda), Elizabeth Gammans, Alice Gammans Carpenter (Joseph), Thomas Gammans (Sarah), Mary Gammans Klein (Dean), Charles Carroll Gammans. (Marylou); 24 grandchildren and 19 great-grandchildren. Two of her children, Theodore and Eric Gammans pre-deceased her. Known by those close to her as Thea, she was the daughter of Ambrose "Ted" Herman Downs and Madelyn Halloran-Downs. She grew up during the depression years in Brookline, Massachusetts, a suburb of Boston amongst a close family of grand-parents, uncles, aunts, and cousins. She attended Radcliffe College and in 1948 married Nelson James Gammans of New York, a Harvard man and WWII veteran. Notwithstanding the many places the family would reside in over the years, she would always retain a predilection for her native Boston, as well as the familiar Bostonian inflection that distinguished her speech. Even while raising a large family Mrs. Gammans would continue to pursue her many personal interests. Among other things, she was a gifted song writer, and book author. The lyrics of her songs could well be recited as poetry. Her books covered subjects of interest to her, drawing from her vivid imagination, and personal experiences. She was adept as a conversationalist, imbued with an intellectual curiosity that knew no bounds-she could carry on a discourse upon countless subjects for many hours. Many such conversations became topics for future books- there was always a book idea on the table! Travel held a unique place in her heart. Among other things, she viewed travel as a learning experience enabling her to become immersed in other cultures and expand her mind. Her best remembered journey took place in 1965 when, accompanied by 10 children and her mother she and Nelson journeyed together through much of Europe during a year’s sabbatical, covering destinations in Holland, Belgium, Luxenbourg, France, Spain, Germany, Morocco, Gibraltar, and England. The family departed the US while she was already a few months pregnant, and thus her 11th, and youngest child, would be born in England. A number of journeys followed over the years both domestic and international, including a six-month stay in Italy upon her 80th birthday. She would often recall that Italian sojourn as among the most rewarding experiences of her life. Later in life, her children grown and scattered about, and following Nelson’s death in 2000, she would spend many weeks on the road for regular visits to her extended family. She would be present at every family wedding and as many special family occasions as possible. She would welcome everyone to her summer home in the coastal village of Searsport, Maine, where she would pursue her writing, surrounded by many books, immersed in her beloved New England, close to the sea. In early August, 2021 she would begin her final journey from Searsport to the assisted living facility in the town of Murfreesboro, TN, near daughter Alice and her family. She is deeply mourned by her extended family, as well as by the many lives she touched. Visitation will be 11:00 until time of Church service at 12:00, Tuesday, September 14, 2021 at St Matthews Catholic Church, 535 Sneed Road W., Franklin. Burial will follow at 2:00 PM at Harpeth Hills Cemetery, 9090 Highway 100 (at South Harpeth Road), Nashville, TN 37221. Jennings and Ayers Funeral Home and Cremation Services, 820 S. Church Street, Murfreesboro, TN 37130. 615-893-2422 Please leave online condolences at www.jenningsandayers.com.

The family of Theodora Carla Gammans created this Life Tributes page to make it easy to share your memories.

Send flowers to the Gammans family.