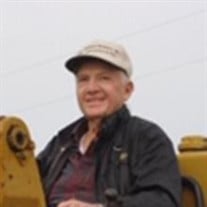 Wendell Jennings Porterfield, Jr. age 91, of Murfreesboro, TN passed away at his home in his sleep late Thursday evening, March 10, 2022. He was born at Rutherford Hospital in Murfreesboro to the late Mr. Wendell Jennings Porterfield and Mrs. Lela (Mac) Porterfield on June 24, 1930. On January 28, 1961 he married Sidney Ann Burkhart at the Wesley Foundation Chapel in Knoxville, TN. He is survived by his three sons: Wendell J. Porterfield, III of Murfreesboro Kendell S. Porterfield and his wife Melissa of Murfreesboro, and Lendell W. Porterfield and wife Laura of Reston, VA, six grandchildren and John Hackney who was like a son. He is also survived by his sister, Peggy Bowman and her husband James of Milton, TN. Born during the Great Depression, W.J. Porterfield grew up on the Porterfield Farm in Milton, attended Milton Baptist Church, and became a pillar in the local community. He took to farm equipment, motorcycles and cars. He raced motorcycles, won a few drag races and enjoyed NASCAR. Known affectionately as “Buster” by many, he was the owner of W.J. Porterfield Excavating and Grading, an active member of First Methodist Church of Murfreesboro, and a longtime Lions Club member. He has spent his career clearing, grading, and developing Rutherford County. His contributions have benefitted our communities from Milton to Murfreesboro, Smyrna, and La Vergne. Wendell was a man of faith and integrity. He was a hardworking, kind hearted and honest man that always saw the good in people. His faithful spirit of building and service to others was apparent to all who knew him. He always answered the call when someone asked for assistance or help. His life truly was a “life well spent” and his gifts, his legacy, and his spirit will live on. Family and friends are invited to Jennings & Ayers Funeral Home, 820 South Church Street, Murfreesboro on Thursday, March 17th from 5-8 p.m. for visitation. A funeral service will be 10:00 A.M. March 18, 2022 at Jennings & Ayers with Jim Creech officiating. Burial will follow at Milton Cemetery. Please leave online condolences at www.jenningsandayers.com Jennings & Ayers Funeral Home, 820 South Church Street, Murfreesboro, TN 37130. 615-893-2422

The family of Wendell Jennings Porterfield created this Life Tributes page to make it easy to share your memories.

Send flowers to the Porterfield family.