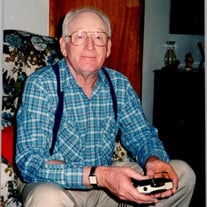 William &#8220;Bill&#8221; Jamison, age 87, passed away October 7, 2020 at Alive Hospice. He was a native of Rutherford County and has lived here all his life. He retired from MTSU and Murfreesboro Water Department where he worked as a plumbing... View Obituary & Service Information

The family of William "Bill" Jamison created this Life Tributes page to make it easy to share your memories.

Send flowers to the Jamison family.